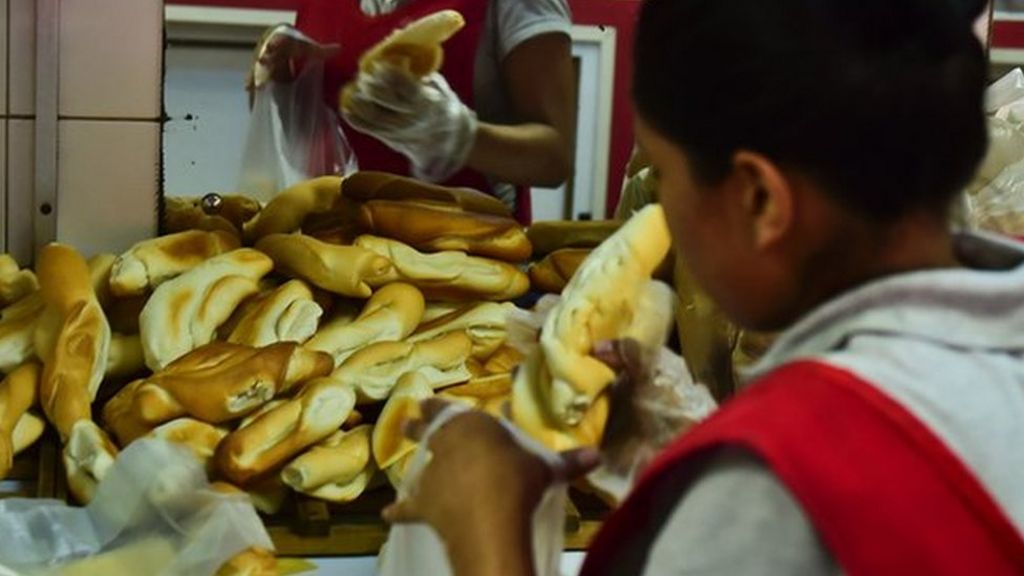 Bread is a human right .. Bakers need to bake their fair share .. Nationalize the bakeries and throw the bakers in jail ..

“The Venezuelan government says it will expropriate bakeries which fail to abide by new government regulations aimed at tackling bread shortages.”

“Severe shortages of basic goods mean that Venezuelans often have to queue for hours to buy essential items.”

“The government blames bakers for the bread shortages, accusing them of using the flour allocated to them to bake pastries rather than simple baguette-style bread in order to maximise their profits.”

“Under the new regulations, bakers will be forced to use 90% of the flour they are given to bake ordinary bread and only 10% for pastries and other sweetened goods.”

“On Sunday, President Nicolas Maduro announced that inspectors would be sent to 709 bakeries in the capital, Caracas, to ensure they were complying with the new rules.”

“He said that those “speculators who hide the bread from the people will face the weight of the law”.”

“”They’re going to pay, I swear. Those responsible for the bread war are going to pay and they better not complain that it was a political persecution,” he added.”

“But the baker’s federation, Fevipan, says it cannot produce more bread unless its members are given more flour.”

“”When there’s flour, we sell bread, but they only send it every 15 or 20 days,” a worker in a Caracas bakery told the Agence France Press news agency.”

“According to Fevipan, government imports of wheat this year so far have fallen far short of the amount needed to guarantee an adequate supply of flour.”

Amid severe shortages the government says it will fine bakers who do not bake enough bread.