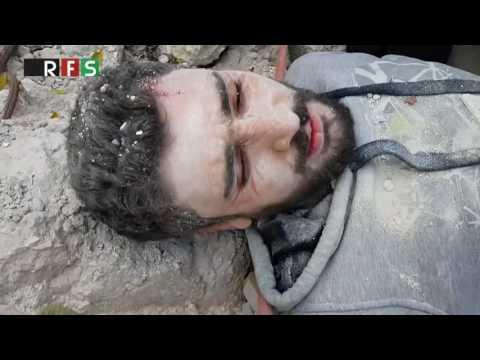 “In this video, the three men are undoubtedly actors. The “victim” was undoubtedly, intentionally buried in preexisting rubble, not trapped in it from an airstrike. The fact that two of the actors are fully dressed in “White Helmet” uniforms acquired through the tens of millions of dollars provided to the organization by Western governments, reveals a potentially serious breach in ethical behavior – similar to ethical violations committed by legitimate medical and rescue workers who use their resources and protected status for political or military purposes, rather than missions of mercy.”

“The “White Helmets” are perhaps the perfect embodiment of the entire Syrian “opposition.” A facade created by foreign interests to divide and destroy an entire nation, unhinge an entire region, all while posing as heroes of “freedom,” “democracy,” and “humanitarianism.” For other supposed nongovernmental organizations (NGOs) worldwide receiving funding from the US and EU, they should seriously consider the company they find themselves among – terrorists, liars, and actors preying on people’s good intentions while exploiting misery they themselves are directly involved in creating.”

This video is a copy of one originally published at/as: https://www.youtube.com/watch?v=JLoFj8X1nIM Edge of death | #MannequinChallenge RFS Media Office 989 …