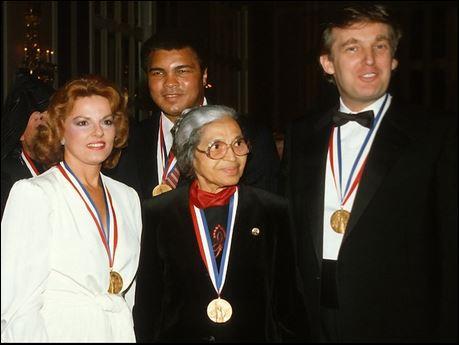 “Eighty Americans from 42 ethnic groups were named yesterday as recipients of the Ellis Island Medal of Honor by the Statue of Liberty-Ellis Island Foundation.”

“Those named yesterday were selected from more than 15,000 nominations. The winners, a mixture of prominent and relatively unknown citizens, were screened by the National Ethnic Coalition of Organizations, which was selected for the work by the foundation.”

“The ELLIS ISLAND MEDALS OF HONOR are awarded annually to a group of distinguished American citizens who exemplify a life dedicated to community service. These are individuals who preserve and celebrate the history, traditions and values of their ancestry while exemplifying the values of the American way of life, and who are dedicated to creating a better world for us all.”

No one accused Donald Trump of being a racist until he decided to run for president and became a threat to Hillary Clinton’s return to power. In 1986, Trump joined several other prominent Americans, such as Rosa Parks and Muhammad Ali, as recipients of an ‘Ellis Island Award.’ One suspects if Trump…