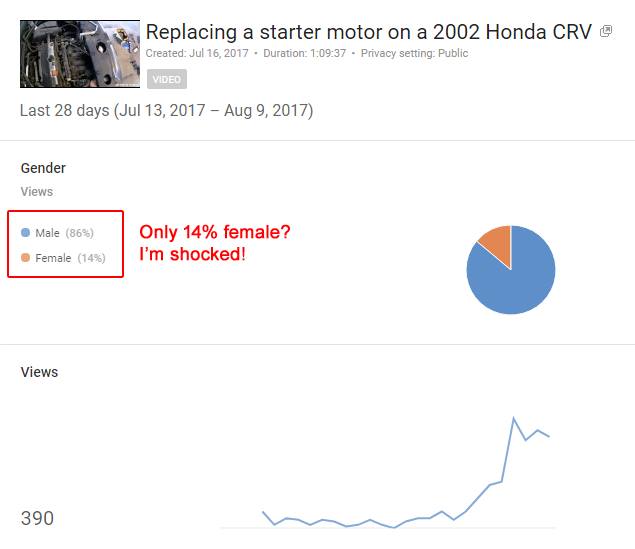 I uploaded my Honda starter replacement video to YouTube, and shockingly enough, only 14% of my viewers are female. Imagine my surprise 🙄 ..

So then why are my viewers not 50% men and 50% women? Which evil misogynist is stopping women from watching my videos, stopping them from repairing their car themselves instead of taking it to a male mechanic, and robbing me of revenue? My videos are publicly available in limitless supply for everyone, including women, to see. There is no gender based entrance exam or restriction prior to watching my video. Who is this bastard denying them my video?

Then I hear that women are “discouraged” from fixing cars from a young age because “that’s something that only boys do”. Well, I certainly agree with that quite a bit and it’s unfortunate, however ..

If your parents discouraged you from working on cars because “girl’s don’t do auto repair”, and you don’t want take responsibility for yourself as an adult, then take it up with them. Let them know that they failed you as parents, disown them, divest from them, punish them, make them pay for your psychiatrist, and raise your children differently.

But stop whining about it and blaming everyone else when I would gladly have more women watching my videos and increasing my bottom line; but they simply “prefer” not to.

It’s a great time to divest from Google products.