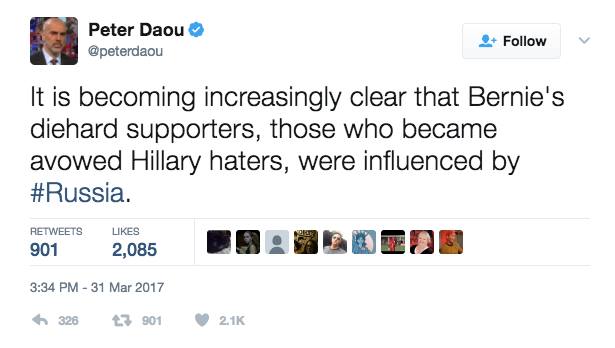 Tad Devine, Bernie’s chief strategist for his 2016 campaign, worked for Putin puppet, Ukrainian Prime Minister Viktor Yanukovich, in 2006, 2009, and 2010. It is well known that Bernie is a Russia sympathizer, having spent his honeymoon in the Soviet Union.

It is also becoming increasingly clear that poor Donald Trump is merely an unwitting beneficiary of Putin’s campaign to undermine Hillary and to throw the election to the pro-Russian candidate, Bernie Sanders. Julian Assange, a well known Bernie Sanders supporter, took part in this anti-Hillary conspiracy and leaked these pro-Bernie / anti-Hillary emails on his personal blog, Wikileaks, in an effort to ensure Bernie’s nomination for the democratic party.

If we expect our democracy to survive this assault, it’s urgent that we investigate this left wing anarcho-socialist cabal, starting with their leader, Bernie Sanders.