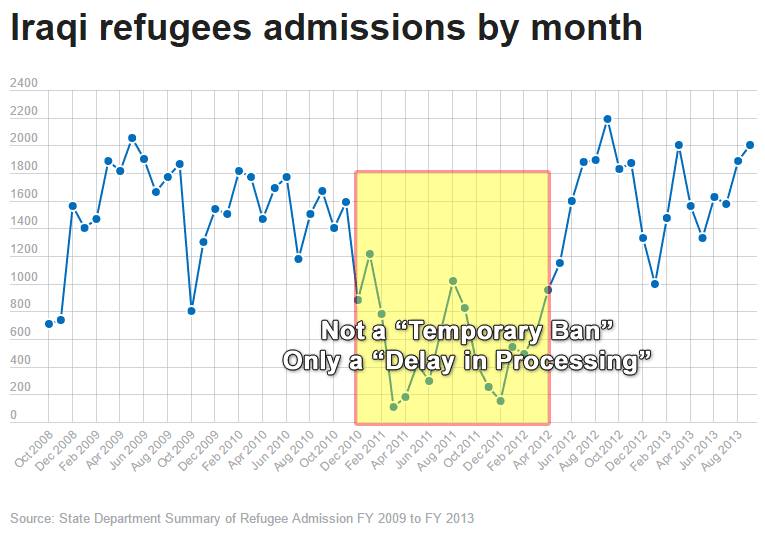 See the mistake Trump made in wanting to ban refugees is that he publicly issued an executive order claiming authority from 8 U.S. Code § 1182 (f) ..

That was far too transparent and opened him up to lawsuits ..

Now, if he had simply done like Obama did and discreetly implemented an under the table “delay in processing” policy at the state department ..

[ we’re not temporarily banning you, we’re just delaying your application, but we’re still discriminating against a muslim majority country ] ..

It would have had a similar effect, and he wouldn’t have run into trouble with the law ..

Obama, being an intelligent “constitutional lawyer”, knew when to go high, and when to go below radar ..

Let’s just hope that Trump doesn’t learn from this mistake ..

““While the flow of Iraqi refugees slowed significantly during the Obama administration’s review, refugees continued to be admitted to the United States during that time, and there was not a single month in which no Iraqis arrived here,” he wrote in Foreign Policy. “In other words, while there were delays in processing, there was no outright ban.””

““The enhanced screening procedures have caused a logjam in regular visa admissions from Iraq, even for those who risked their lives to aid American troops and who now fear reprisals as the Obama administration winds down the U.S. military presence,” the Baltimore Sun reported.”

““Immigration authorities soon began rechecking all Iraqi refugees in America, reportedly comparing fingerprints and other records with military and intelligence documents in dusty archives. About 1,000 soon-to-be immigrants in Iraq were told that they would not be allowed to board flights already booked. Some were removed from planes. Thousands more Iraqi applicants had to restart the immigration process, because their security clearances expired when the program stalled. Men must now pass five separate checks, women four, and children three.””