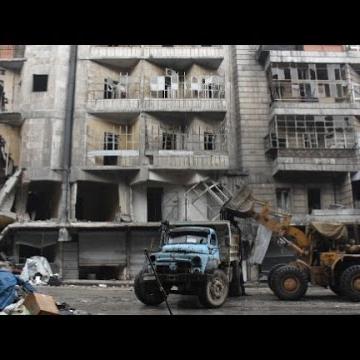 Listen to your future Democratic presidential nominee .. Let her talk some sense into you ..

“Initially I hadn’t planned on meeting him,” she said about Assad. “Whatever you think about President Assad, the fact is that he is the president of Syria. In order for any possibility of a viable peace agreement to occur, there has to be a conversation with him.”

“I’ll tell you what I heard from the Syrian people,” she continued. “As they were walking down the streets in Aleppo, in Damascus… they expressed happiness and joy at seeing an American walking through their streets. But they expressed a question. They said: ‘Why is it that the United States, its allies and other countries, are providing support, are providing arms, to terrorist groups, like al-Nusra, al-Qeeda, ISIS, who are on the ground there, raping, kidnapping, torturing and killing the Syrian people?’ Children, men, women, people of all ages.”

“Every place that I went, every person that I spoke to, I asked this question to them, and without hesitation, they said there are no moderate rebels. Who are these moderate rebels that people keep speaking of?”

“The Syrian people recognize, and they know, that if President Assad is overthrown, a group like ISIS or al-Qaeda… will take charge of all of Syria.”