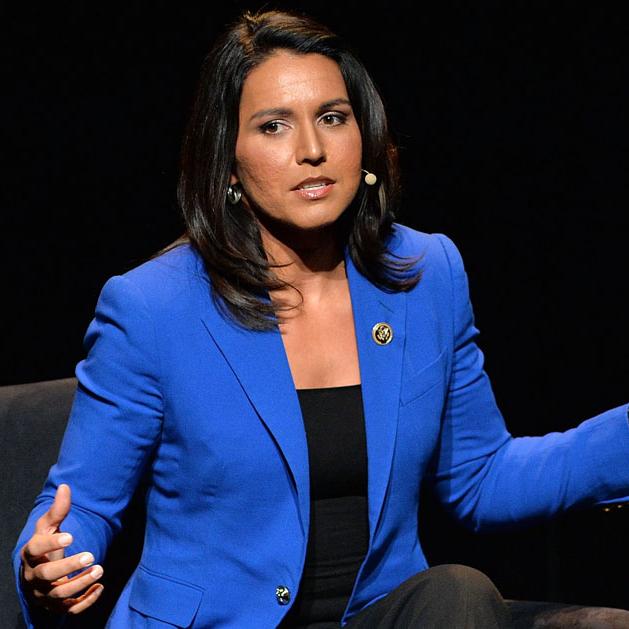 Maybe her trip was financed by Putin .. She does come off as an “alleged” Russian puppet .. Back in November she even met with Trump .. Burn her at the stake, I say ..

“Congressional leaders were blindsided by Gabbard’s trip to war-ravaged Syria with staffers saying she didn’t give the customary advanced warning to Democratic or Republican leadership offices.”

“Hill insiders say they believe the trip was paid for by a non-governmental organization (NGO) but aren’t sure which one or if it has ties to the Assad regime. The trip, which Latimer called a “fact-finding” mission, was first reported by Foreign Policy.”

“But this trip shocked congressional aides from both parties.”

“She has even accused the Obama administration of funding terrorist groups and introduced legislation in December that would prevent the administration from “directly or indirectly supporting” groups including ISIS and al Qaeda.”

“In the past Gabbard, an Iraq War veteran, has condemned efforts to overthrow Assad, saying ousting the Syrian president would just create more instability in the already volatile region”

“When asked if Gabbard met with Assad, the strongman many blame for a conflict that has killed 400,000 and displaced millions, Latimer declined to comment, citing security and logistical concerns.”

“To her critics, Gabbard is an apologist to a regime that has committed countless war crimes and destabilized the greater Middle East. To her supporters, she’s a lonely voice of sanity against a growing tide of bipartisan interventionism that risks bogging down the United States in another conflict in the Middle East.”

“She has repeatedly compared Assad to Muammar al-Qaddafi and Saddam Hussein, brutal dictators who fell prey to Western intervention in conflicts that later became unpopular.”

““I don’t think Assad should be removed,” Gabbard told CNN. “If Assad is removed and overthrown, ISIS, al Qaeda, al Nusra — these Islamic extremist groups will walk straight in and take over all of Syria. … They will be even stronger.””

Democratic Rep. Tulsi Gabbard didn’t warn congressional leaders before going on a secret trip to Syria this week, according to multiple sources.