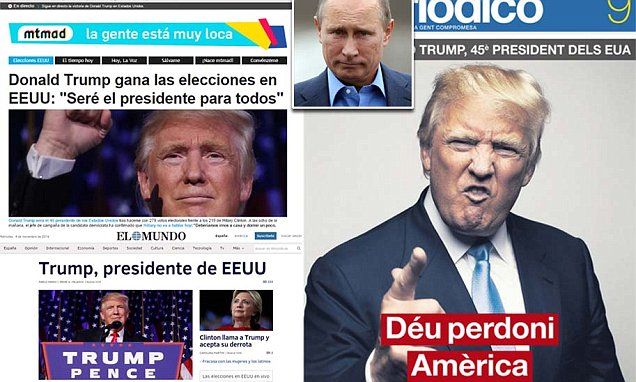 Time to put an end to Hillary and Obama’s new Cold War and work towards nuclear disarmament again ..

“World leaders have reacted with disbelief to the surprise election of Donald Trump as US president – and Russian President Vladimir Putin has become one of the first to congratulate the Republican on his win.”

“Putin has sent Donald Trump a telegram of congratulation.”

“In a brief statement, the Kremlin said Putin expressed ‘his hope to work together for removing Russian-American relations from their crisis state’.”

“Putin also said he has ‘confidence that building a constructive dialogue between Moscow and Washington that is based on principles of equality, mutual respect and a real accounting each other’s positions, in the interests of our peoples and the world community’.”

Trump – the world reacts:Disbelief at The Donald’s victory

World leaders have reacted with shock at the surprise election of Donald Trump as US President. A senior German politician has described it as a ‘huge shock’, while it was welcomed in Moscow.