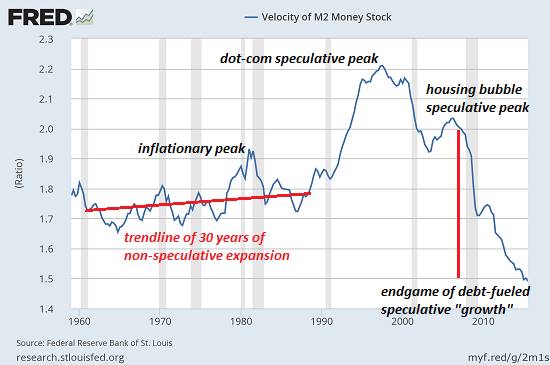 There was no economic recovery ..

I realize millennials are adamantly ignorant but they, with an unemployment rate of 12%, are in the process of permanently pricing themselves out of a well paying job ..

Now that Bill Clinton has conceded that Obamacare is crazy, please take some notes.

When a government requires health insurance companies to sell a certain level of coverage, for that transaction to take place it must clear at a certain market price.

When the market price is too high a price for the consumer to afford and the government then proceeds to set the price lower by decree, the insurance company will leave the market.

This was easily predictable to any honest economically literate person, and this is what is now happening. One third of the US will have only one insurance carrier in 2017 with premiums going up 30-50+%. That is how a government creates a monopoly, but that’s a topic for another day.

This basic principle applies to any market sector; healthcare, education, housing, food, etc., and any other sector where the government requires minimum standards.

We have a collapsing money velocity and have been, whether you understand it or not, stuck in a depression. It would be much more apparent if the Federal Funds rate wasn’t near 0% since 2008.

Producers and consumers who are left alone will determine between themselves what level of quality or coverage of a product is deemed desirable and affordable. With an increase in the rate of these types of transactions taking place and an increase in the money velocity, demand, profits, wages, jobs, and price inflation will all increase.

However, increasing regulations and mandating levels of quality or levels of coverage that are not affordable has the depressing effect of reducing the rate of transactions and subsequently the rate of velocity of money.

If you’re a millennial and expect to have a prosperous future, I strongly urge you to develop a basic economic literacy and stop what it is you’ve been doing.

You’re destroying your own future.

“Velocity is an indicator that buyers and sellers agree on a price, that the price is “right” and not an outlier. That’s why you see a stock move on high volume “confirming” the move, because it means the prices wasn’t “right” at the previous level, while more people agree the new price is fair.”

“If prices are allowed to go where they need to without pressure and manipulation, you will always have velocity, as the most buyers and sellers will always agree at some price. Because this is true, low velocity cannot happen in a free market. Which means the only reason for low velocity (in this or the previous Depressions) is that someone has somehow managed to get an edge that prevents them from selling, from liquidating, at the true price, i.e. the one the buyers will agree to.”

“So yes, the Fed, the governments, the insiders can manipulate to their heart’s content, as they’ve been doing, but that unnatural pressure goes somewhere. And the pressure diverts into velocity. As we saw in the Great Depression, or the Roman Empire, velocity can stagnate for 10, 20, or 1,000 years until the manipulation ends, property rights are restored, and we have a free market.”