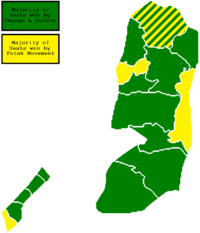 You know it’s funny. A friend of mine did not know that Hamas was the democratically elected government of Palestine. He just assumed that they were a terror group holding the people hostage.

In other words 44.45% of Palestinians supported Hamas, and 4.25% support PFLP (who are even more militant than Hamas).

So if you’re serious about removing Hamas from Palestine, you’ll need to kill approximately 482,000 Palestinians. And that assumes that 410,000 Palestinians who voted for Fatah won’t turn on you.

And you know, I’m all for “final solutions”; a little bit of ethnic cleansing goes a long way with dealing with annoying people. I’m just saying these are the numbers so let’s be more deliberate instead of blowing up innocent buildings.

Elections for the Palestinian Legislative Council (PLC), the legislature of the Palestinian National Authority (PNA) were held on 25 January 2006. The result was a victory for Hamas, who won with 74 seats of the 132 seats, whilst the ruling Fatah won just 45. In terms of votes received, Hamas took 4…